Hoover finishes with a flourish

JACKSON TWP. The soles of their shoes bit into the marshy field at Robert Fife Stadium.

​Their soles were buried beneath the grass.

​The Vikings finished the season in a rare way: With a 7-3 record and a win.

​Hoover’s 21-7 victory over Jackson on Friday night could lead to a playoff berth, depending on Massillon’s game today.

​Defensive back Seth Allman ended the season the way he started it, with a return for a score. Allman, who opened the year with a kickoff return for a touchdown, put the finishing touches on this win with a 42-yard interception return in the final minutes.

​“I’ll remember this game for the rest of my life,” said Allman, the muddy water dripping from his arms, making a puddle at his feet. “I had the time of my life out there. It was like backyard football in the mud and rain. It was great.”

​Mother Nature dumped a cold, steady rain all night. The band show was canceled before the game, prompting a number of fans to leave.

​It was the worst field conditions Hoover’s Don Hertler Jr. coached in.

​“I’ve been in the rain and cold before, but not like that,” Hertler said. “I haven’t seen slime like that since ‘Ghostbusters.’ “

​His players were Bear Busters.

​The middle of the field looked like a cow pasture. But Hoover running back Phillip Howard somehow broke a couple of tackles

at the Jackson 29 and shuffled through the mud and into the end zone for the only score of the first half.

​“I almost slipped,” Howard said. “I took the handoff, went toward the hole, and it was full of people. I cut out to the left, split two defenders, stiff-armed a guy and outran everyone.”

​Yeah, it didn’t look that easy.

Weather conditions made it a field-position game.

​The first break came on Jackson’s next possession. A fumbled quarterback-center exchange squirted 6 yards in front of the line before Hoover’s Matt Wakulchik recovered at the North Canton 44.

​“We didn’t have one fumbled exchange,” Hertler said. “At least we were able to run plays.”

​The Vikings punted after the recovery, but they were winning the field position. Jackson’s next drive started at its own 10 yard line.

A huge tackle for loss on Carlin Isles by LB Jordan Bucar set up a three-and-out. Jackson’s ensuing punt was hauled in by Phillip Howard at the Jackson 35 where Howard walked on water – literally – into the end zone. ​However, he was injured in the second quarter and did not return. He did a split trying to cut and apparently popped his left hamstring.

​His younger brother, freshman sensation Erick Howard, filled in more than adequately. He gained 37 yards on four consecutive carries when his brother went out of the game, but cooled off after that.

​Erick Howard was taken to the hospital with an ankle injury. The Howard brothers combined for 118 yards on 26 carries. Erick had 73 and 20 carries.

​Jackson’s offense managed just 54 yards of offense. Its only score came off a Hoover fumble inside the 10.

“The field conditions were the same for both sides,” Jackson coach Phil Mauro said with a nod to the combined 11 fumbles. “The kickoff return was a great start; unfortunately we didn’t do much with it. You can’t turn the ball over six times.”

​The Vikings appeared to take control in the third quarter. A Jared Wackerly-to-Matt Wakulchik pass went for a 7-yard TD, making it 14-0.

​But Hoover’s fumble inside the 10 cracked the door open. The Bears scored on Ryan Pfeiffer’s 3-yard run. But then Allman’s 45-yard interception return turned into a celebration on the Hoover sideline.

​“Our defense, all night long, all season long except one game, was fantastic,” Hertler said. “They kept us in games all year.”

“We’re happy to be 7-3 and win our last ballgame. We finished playing as hard as we played all year, and we had fun playing. They’ll remember this game for a long time.”

​The souls of his shoes were buried in dried mud.

​Not too many teams get to end a season this way. 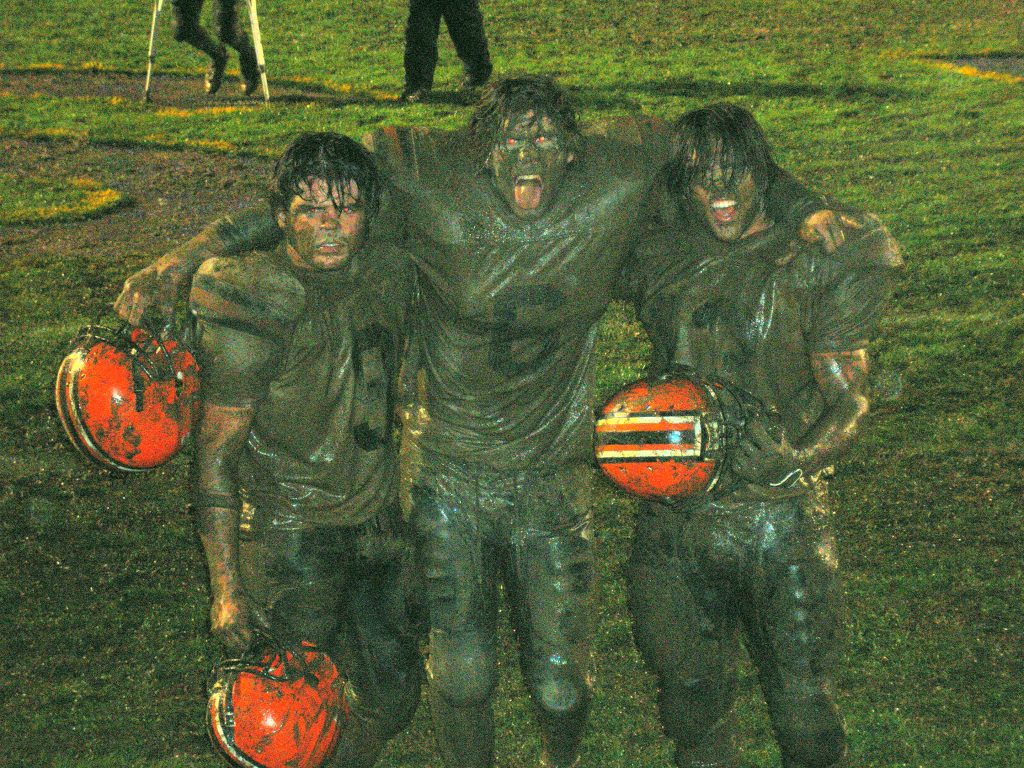