In September, 1947, Post-war America zoomed full-speed ahead. The country was growing rapidly. Subsequently, Americans eagerly pursued their dreams. The horrors of World War II were two years removed and the Cold War was in its infancy stages. The time was ripe for progress. In a small, but growing Stark County village, progress came in the form of a newly constructed football stadium.

The stadium boasted covered stands and state-of-the-art lighting. But, the players knew the stadium was more than a venue to play football. “We were certainly aware of the fact it was named for the soldiers who were lost in World War II,” said Bill Kobel, a senior on that North Canton team.

Sixty years later, some of the boys who played in that first game returned to the stadium for a tribute. They were eager to remind the fans in attendance why the stadium bears a simple, but important name. “I think the most significant part of that being a 60-year-old stadium is the fact the stadium was built in memory of the 20-some boys from North Canton who lost their lives during World War II,” said Bill Owens, a senior captain in ’47.

Jack Sponseller, a junior on the ’47 team had this to say, “Over the years, I thought it was quite an honor to play the first game there,” He added, “I felt very honored because I had two brothers, both who served in the war, and a cousin who was killed in battle.” His brothers, Paul and Marvin, fought in the Pacific and Europe, respectively. Marvin was a part of Patton’s 3rd army, which was pivotal in relieving the surrounded 101st Airborne in Bastogne in December 1944. As a result, he was wounded in battle.

Jack’s cousin, Harold Sponseller, was killed in France during the Allied breakout after the Normandy landings. Harold played on the 1939 North Canton basketball team that won a state title.

The Vikings finished 9-0-1 in 1947. Most noteworthy, they tied a school record by beating Norton 74-0 in their final game.

A few of the 1947 Vikings went on to play college football. Some ended up in the military. While several of them remained in North Canton to watch their sons and grandsons play for the Vikings in Memorial stadium. 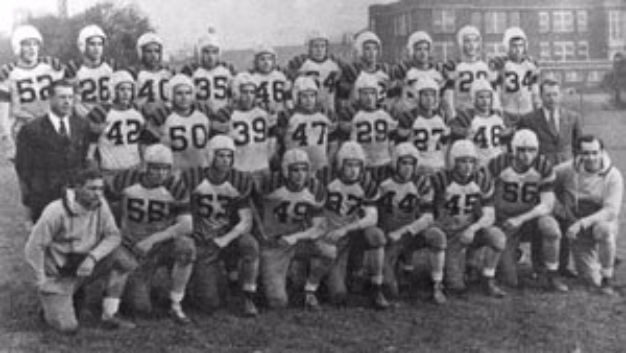